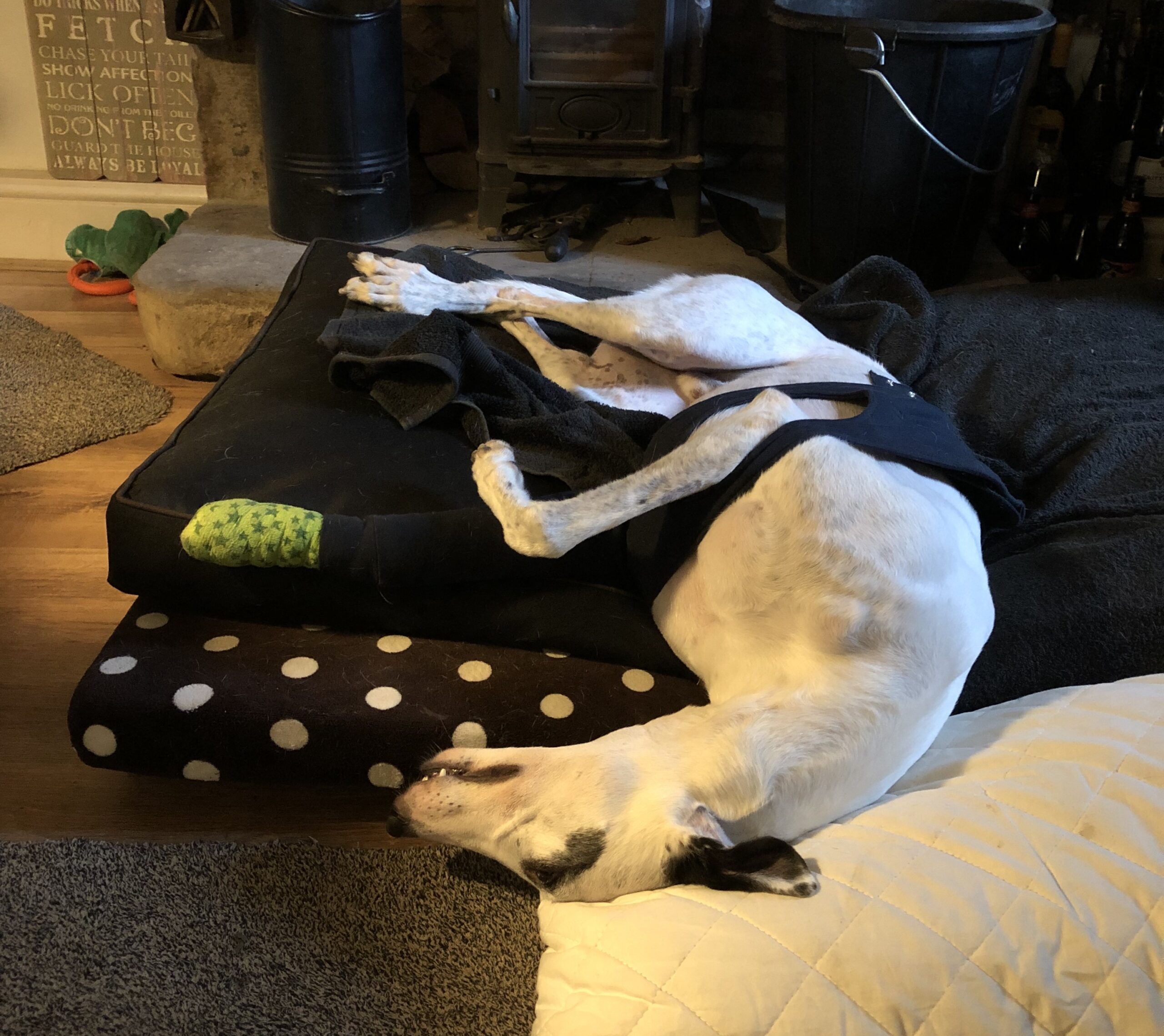 Whist Fionn survived the adder bite in 2019, it’s never far from my mind when he’s mooching in the garden or I catch sight of his shiny skin graft. Sometimes I wonder how he survived or how we coped – but we did, and he is here to tell the tale.

His story reminds me of what a fantastic dog he is (like I need reminding) but also acts to remind others that adders may be less predictable than we think and if you are ever in doubt about your dog’s injury, consult your vet.

Toward the end of February 2019, our greyhound Fionn developed an infection in his front leg. It progressed from a slight swelling, with no clear mark or wound, just above his stopper pad one evening, to a complete lack of weight-bearing and more extreme swelling toward his elbow by the morning.

My first thought was that he had knocked it charging back onto the patio, so I iced it and kept an eye on him, but the progression of the swelling by morning indicated something else. My vet came out first thing, again could see no obvious indication of trauma, but we took him in for an X-ray that afternoon—he had to be carried as he was in too much pain to walk.

By late afternoon, they told me that although his radiographs were clear, they were keeping him overnight on IV antibiotics and fluids as the skin on his lower leg was necrotic and sloughing off. He was allowed to home 24 hours later under strict observation. Had I known at the time what we were dealing with, I would have insisted he stayed at the practice.

Within 48 hours, Fionn’s leg progressed from a barely noticeable swelling to the most horrible wound I have ever seen.

No one could pinpoint the cause, despite the involvement of three vets. At the time, they suspected an insect or an animal bite. There were no clues that he may have been bitten or stung, he made no noise at the time, there was no entry site or significant redness, but tests concluded it was thankfully not Alabama Rot.

[Note: the following images are of tissue damage and surgical procedures and may be disturbing to some.]

Once discharged, we had his dressing changed every 24 hours, and his vets were initially pleased with his progress. The leg was much less swollen, and we hoped that only the superficial layers of skin were affected. However, as the swelling reduced, two puncture wounds became clear when cleaning his leg and were attributed to an adder bite.

His leg was so swollen that all the vets missed the bite as he certainly did not indicate that he was hurt. It was February, in a wet and muddy English garden, all timescales for anything happening to him anywhere else didn’t add up, and I still can’t believe it happened to one of our dogs.

A couple of days later, it became clear that the wound was no longer superficial; the larger patch that we feared would come away was dying. Surgical debriding to remove the dying skin was the only option, and whilst another general anaesthetic was stressful, it gave the leg a clean slate to heal.

Having been told that he may lose his leg and wouldn’t manage on three, the weeks that followed left me reeling. One minute I was terrified by the enormity of what he was going through, what was still to come, how upset he got at going to the vet every two days, yet being so happy watching him still wanting to pounce on his toys and run back up the garden, bandaged toe to his elbow.

I muzzled him for every vet visit, but not once in five months of treatment, three to four times each week, did this amazingly gentle and stoic boy show any aggression toward me or anyone at the practice.

The advice of soft tissue specialists confirmed that the skin loss was considerable. The initially-considered skin graft methods would be unlikely to succeed considering the size and location of his wound. All thoughts led to the grafting of skin from another part of his body which would require a stay of at least a week at the referral centre an hour away and then a minimum of one month’s confinement or immobilization.

The thought of confining my big brave boy to a crate he only used when we first rescued him made me feel sick. It was unmanageable; he was nearly 40kg and had to duck to get into his crate under normal conditions and certainly wouldn’t be able to manage it following two simultaneous surgeries.

So, I stalled – took advice on healing by secondary intention and decided to give the wound a chance to granulate and not rush into anything so highly invasive. It was like a weight had lifted, I no longer felt pressured into deciding on the timing, and our options would remain open. Despite everything that was happening to him, Fionn was, thankfully, as happy and goofy as ever; it was only me who was getting dragged through the wringer!

Dressings were still being changed at the vets every other day as caring for a wound of this size was too delicate for me to handle. It also gave us the chance to record its progress photographically and to protect any new tissue cells desperately trying to develop.

As the weeks passed, we, unfortunately, weren’t getting the speed of results we had hoped for; some granulation tissue was developing, but there was too far to go, however, a chance meeting with a different vet gave us a lifeline that made the decision to undergo surgery a no-brainer.

Another vet offered to do his surgery in-house using a lattice technique that allowed the wound to drain naturally without the need for additional equipment or confinement. Having seen photographs of the technique performed on a whippet following an RTA, knowing he’d only need to be at the vet overnight, which was only 10 minutes away, I knew it was the process I wanted for Fionn – and we arranged it for the following week.

Like any procedures involving the grafting of skin, there are never any givens – I soon realized that there was never going to be a point where the vets or nurses would tell me we were out of the woods, but day by day, it took, developed a blood supply and slowly filled in the gaps. Fionn was finally on the mend, but it was the scariest and most emotional time; we still had a long way to go before his leg healed.

I have, however, some of the most amazingly supportive friends – who, despite the five months we were dealing with this, put up with me sending them gross pictures of his progress, day and night. I couldn’t have coped without them.

I spent more than three months sleeping downstairs with Fionn on camping mats and can honestly say that it was a terrifying experience. He was not insured, but animals have a lot to teach us about trust and getting on with things. My boy just accepted what was happening to him, every day and I just knew I had to keep putting one foot in front of the other, get on with it and follow my vets’ instructions to the letter.

Our handsome boy is now totally recovered; the skin on the inside of his leg is particularly delicate and will always be vulnerable, so, my final point – I believe you can never be too cautious. Check your dogs over regularly and be vigilant with anything you notice.

I would like to say that adder bites are rare, but every year we hear of dogs getting bitten and I think what is an important ‘take-home’ is that they don’t always stick to the predictable moorland and heathland habitats we would normally expect. Had we known Fionn had been bitten, had we been in a different location or had he reacted, our response would have been very different.

We can never thank the Bakewell Veterinary Clinic enough for being there for my boy, both day and night when we needed them most.